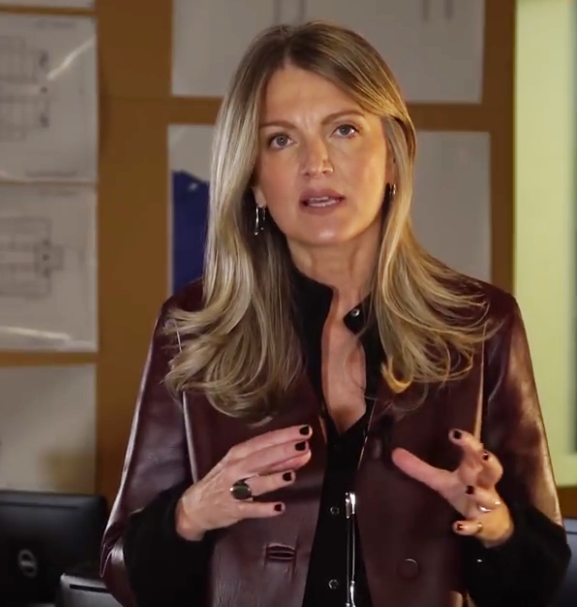 Konstantina S. Nikita received the diploma in Electrical Engineering and the Ph.D. degree from the National Technical University of Athens (NTUA), as well as the M.D. degree from the Medical School, University of Athens. From 1990 to 1996, she worked as a researcher at the Institute of Communication and Computer Systems. In 1996, she joined the School of Electrical and Computer Engineering, NTUA, as an assistant professor, and since 2005, she serves as a professor at the same school.

She has been honorary chair/chair of the program/organizing committee of more than 50 international conferences, while she has served as keynote/invited speaker at several international conferences, symposia and workshops. She has been the advisor of 27 completed Ph.D. theses, several of which have received various awards. She has received various honors/awards, with the Bodossakis Foundation Academic Prize (2003) for exceptional achievements in "Theory and Applications of Information Technology in Medicine" being one of them.

Dr. Balanis is a Life Fellow of the IEEE. He has served as Associate Editor of the IEEE Transactions on Antennas and Propagation (1974-1977) and the IEEE Transactions on Geoscience and Remote Sensing (1981-1984); as Editor of the Newsletter for the IEEE Geoscience and Remote Sensing Society (1982-1983); as Second Vice-President (1984) and member of the Administrative Committee (1984-85) of the IEEE Geoscience and Remote Sensing Society; and Chair of the Distinguished Lecturer Program (1988-1991), Distinguished Lecturer (2003-2005), member of the AdCom (1992-95, 1997-1999) and Chair of the Awards and Fellows Committee (2009-2011) all of the IEEE Antennas and Propagation Society. He is the author of Antenna Theory: Analysis and Design (Wiley, 2016, 2005, 1997, 1982), Advanced Engineering Electromagnetics (Wiley, 2012, 1989) and Introduction to Smart Antennas (Morgan and Claypool, 2007), and editor of Modern Antenna Handbook (Wiley, 2008) and for the Morgan & Claypool Publishers, series on Antennas and Propagation series, and series on Computational Electromagnetics.

Nader Engheta (S'80–M'82–SM'89–F'96) received the B.S. degree in electrical engineering from the University of Tehran, Tehran, Iran, and the M.S. and Ph.D. degrees in electrical engineering from the California Institute of Technology (Caltech), Pasadena.,He is the H. Nedwill Ramsey Professor at the University of Pennsylvania, with affiliation in the departments of Electrical and Systems Engineering, Bioengineering, Materials Science and Engineering, and Physics and Astronomy.

After spending one year as a postdoctoral research fellow at Caltech and four years as a Senior Research Scientist at Kaman Sciences Corporation's Dikewood Division, he joined the faculty of the University of Pennsylvania. He is also a member of the Mahoney Institute of Neurological Sciences. He was the graduate group chair of electrical engineering from 1993 to 1997. Selected as one of the Scientific American Magazine 50 Leaders in Science and Technology in 2006 for developing the concept of optical lumped nanocircuits, he is a Guggenheim Fellow, an IEEE Third Millennium Medalist, a Fellow of the American Physical Society (APS), Optical Society of America (OSA), American Association for the Advancement of Science (AAAS), and of the SPIE-International Society for Optical Engineering.

He is the recipient of the 2014 Balthasar van der Pol Gold medal from URSI (International Union of Radio Science), the 2013 Inaugural SINA award in engineering, 2013 Benjamin Franklin Key award, the 2012 IEEE Electromagnetics Award, the 2008 George H. Heilmeier Award for Excellence in Research, the Fulbright Naples Chair Award, NSF Presidential Young Investigator award, UPS Foundation Distinguished Educator term Chair, and several teaching awards. He was an Associate Editor of the IEEE Antennas and Wireless Propagation Letters (2002–2007), of the IEEE Transactions on Antenna and Propagation (1996–2001), and Radio Science (1991–1996). He was on the Editorial Board of the Journal of Electromagnetic Waves and Applications, and of Metamaterials. He is currently on the Editorial board of Physical Review X (PRX) of the American Physical Society, of Waves in Random and Complex Media, of Nanophotonics, and of the Istituto Superiore Mario Boella Book Series in Radio Science. He served as an IEEE Antennas and Propagation Society Distinguished Lecturer for the period 1997–1999. He is a member of Sigma Xi, Commissions B, D, and K of the U.S. National Committee (USNC) of the International Union of Radio Science (URSI), and a member of the Electromagnetics Academy. He was the Chair of the Commission B of USNC-URSI for 2009–2011 and of the Gordon Research Conference on Plasmonics in 2012. His current research interests and activities span over a broad range of areas including metamaterials and plasmonics, nanooptics and nanophotonics, nanocircuits and nanostructures modeling, graphene photonics, one-way flow of photons, bio-inspired/biomimetic polarization imaging and reverse engineering of polarization vision, miniaturized antennas and nanoantennas, hyperspectral sensing, biologically-based visualization and physics of sensing and display of polarization imagery, fields and waves phenomena, fractional operators and fractional paradigm in electrodynamics. He has guest edited/co-edited several special issues, including the special issue of the Journal of Electromagnetic Waves and Applications on “Wave Interaction with Chiral and ComplexMedia” in 1992, part special issue of the Journal of the Franklin Institute on “Antennas and Microwaves” in 1995, special issue of Wave Motion on “Electrodynamics in Complex Environments” in 2001, special issue of the IEEE Transactions on Antenna and Propagation on “Metamaterials” in 2003, special issue of Solid State Communications on “Negative Refraction and Metamaterials for Optical Science and Engineering” in 2008, special issue of the IEEE Journal of Selected Topics in Quantum Electronics on “Metamaterials” in 2010, the special issue of the Proceedings of IEEE on “Metamaterials: Fundamentals and Applications in Microwaves and Optical Regimes” in 2011, and the special section of the Physical Review X (PRX) on metamaterials. He co-edited the book “Metamaterials: Physics and Engineering Explorations” by Wiley—IEEE Press, 2006. (Based on document published on 6 November 2014).

Gianluca Lazzi is a Provost Professor at the Keck School of Medicine (Ophthalmology) and the Viterbi School of Engineering (Electrical Engineering) at the University of Southern California. He was a USTAR Professor and the Chair of the Department of Electrical and Computer Engineering (ECE) at the University of Utah from 2009 to 2017. Prof.Lazzi's research work has been sponsored by several US federal agencies, including NIH, NSF, and DOE. He has made contributions to fields of bioelectromagnetics, liquid metal electronics, antennas, wireless electromagnetics, magnetic neurostimulation, and computational neuroscience. For the past 20 years he has been working on an artificial retina to restore partial vision to the blind; he is currently the Principal Investigator of an interdisciplinary and multi-institutional, National Institutes of Health (NIH)-supported research effort on “Multiscale Modeling for Neural Excitation.” He has published over 200 papers in journals, conference proceedings, and books. His research work has been featured in publications such as Forbes, the Economist, MSNBC, MIT Technology Review, and several others.

Prof. Lazzi has been the Editor-in-Chief (EiC) from 2008 to 2013 of one of the leading journals in the field of antennas and propagation, IEEE Antennas and Wireless Propagation Letters (AWPL). Recently, he was one of the invited speakers at the Grand Challenges in Life Science Symposium, held at the National Academies; a keynote speaker at the 2017 International Applied Computational Electromagnetic Society (ACES) Symposium, Suzhou, China; and a keynote speaker at the 2015 URSI-AT-RASC, Gran Canaria. He is one of the co-founders of Teveri LLC, and served as its Chief Executive Officer from 2015 to 2017. Teveri focuses on the commercialization of stretchable conductive fibers knitted in clothing and athletic apparel to bring biometric, sensing and illumination solutions to smart clothing. A Fellow of the iEEE and the AIMBE, Prof. Lazzi served as the Chair of Commission K (Electromagnetics in Biology and Medicine) (2006–2008) and a Member-at-Large (2009–2011) of the U.S. National Committee of the International Union of Radio Science (URSI), AdCom member of the IEEE APS Society, Chair of Publications of the IEEE APS Society and Vice President, Publications, of the IEEE Sensors Council. He was the recipient of the 1996 Curtis Carl Johnson Memorial Award from the Bioelectromagnetics Society, a 1996 URSI Young Scientist Award, a 2001 Whitaker Foundation Biomedical Engineering Grant for Young Investigators, a 2001 National Science Foundation CAREER Award, a 2003 NCSU Outstanding Teacher Award, the 2003 NCSU Alumni Outstanding Teacher Award, the 2003 ALCOA Foundation Engineering Research Award, the 2006 H.A. Wheeler Award from the IEEE AP Society, a 2008 Best Paper Award at the IEEE GlobeCom Conference, the 2009 ALCOA Foundation Distinguished Engineering Research Award, a 2009 R&D 100 Award, and the 2009 Editors Choice Award from the R&D Magazine for the Artificial Retina Project.

His main research interests include small antennas for mobile communications, microwave antennas for medical applications such as cancer treatment, research on evaluation of the interaction between electromagnetic fields and the human body by use of human-equivalent phantoms, and antenna systems for body-centric wireless communications.
He has authored and co-authored nearly 200 peer-reviewed journal papers, over 400 international conference papers and over 20 book chapters including “Handbook of Microstrip Antennas” (IEE, 1989) and “Antennas and Propagation for Body-Centric Wireless Communications” (Artech House, 2012). He co-edited the book “Antennas for Small Mobile Terminals” (Artech House, 2018).

Dr. Ito is a Life Fellow of the IEEE, a Fellow of the Institute of Electronics, Information and Communication Engineers (IEICE), Japan, and a Fellow of the International Union of Radio Science (URSI). He served as Chair of the Technical Committee on Human Phantoms for Electromagnetics, IEICE, from 1998 to 2006, Chair of the IEEE AP-S Japan Chapter from 2001 to 2002, an Associate Editor for the IEEE Transactions on Antennas and Propagation from 2004 to 2010, an AdCom member for the IEEE AP-S from 2007 to 2009, a Distinguished Lecturer for the IEEE AP-S from 2007 to 2011, General Chair of IEEE iWAT2008, an Editor for the International Journal of Hyperthermia from 2008 to 2017, Chair of the Technical Committee on Antennas and Propagation, IEICE, from 2009 to 2011, a member of the Board of Directors, the Bioelectromagnetics Society (BEMS) from 2010 to 2013, a Councilor to the Asian Society of Hyperthermic Oncology (ASHO) from 2010 to 2018, a Lecturer for the European School of Antennas on “Antennas and Propagation for Body-Centric Wireless Communications” in 2011, 2013 and 2018, General Chair of ISAP2012, a Delegate to the European Association on Antennas and Propagation (EurAAP) from 2012 to 2017, a Vice-President of the Japanese Society for Thermal Medicine (JSTM) from 2017 to 2019, IEEE AP-S President-Elect for 2018, and IEEE AP-S President for 2019. He currently serves as Vice-Chair of Commission K, URSI, and as IEEE AP-S Immediate Past-President for 2020.
He has been invited as a keynote speaker at many international conferences including EuCAP2017 (Paris, France, 2017). He has received several awards including the 2009 Excellent Paper Award from IEICE Communications Society, the Best Paper Award from ISAP2012, the 2015 Society Award from JSTM, and the 2020 Balthasar van der Pol Gold Medal from URSI.

Asimina Kiourti is an Assistant Professor in the Department of Electrical and Computer Engineering at The Ohio State University where she leads the Wearable and Implantable Technologies group. From 2013 to 2016 she served as a Post-Doctoral Researcher and then a Senior Research Associate at Ohio State’s ElectroScience Laboratory. Prior to that, she received the Ph.D. degree in Electrical and Computer Engineering from the National Technical University of Athens, Greece (2013) and the M.Sc. degree from University College London, UK (2009).

Prof. Kiourti is active in IEEE and USNC-URSI, where she serves in various elected and appointed roles. Her contributions have gained international reputation and have been featured by TechCrunch, Gizmodo, Times of India, Australia Network News, and the ALN Magazine, among others.

Maximizing the visibility and outreach of published research