The APS Student Design Contest (SDC) is an annual contest about the design of a device or system mainly involving antenna and propagation aspects. It culminates with a demonstration by the finalists at the annual IEEE AP-S Symposium. The Contest aims to engage and encourage study in the fields of electromagnetism, particularly antennas and propagation. Prizes are awarded for the first, second and third prize. Here is the list of winners and finalists from previous years.

Other finalists of 2022 (Alphabetical):

Other finalists of 2021 (Alphabetical):

Other finalists of 2020 (Alphabetical): 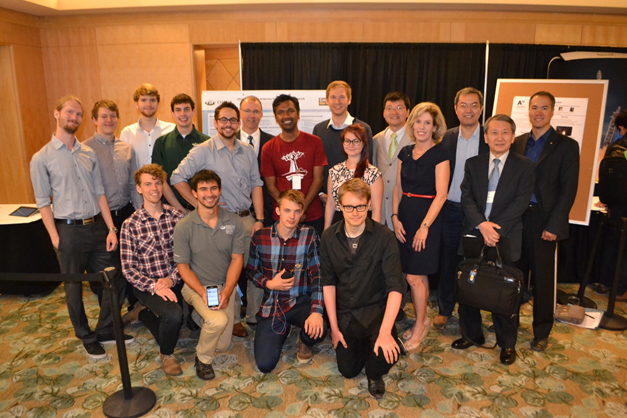 Group Photo of the 2015 Design Contest Finalist Teams with the Judges.

Apart from the increased number of entries, we also observed an increase in the quality of the presented work. In part, this can be attributed to several enthusiastic mentors taking advantage of the Contest to motivate their students, by aligning project-based courses with the Contest. Such efforts are in line with the AP-S's desire to promote interesting student activities in the field, effectively reaching out to students who may be having their first real encounter with AP. It's a cool and fun subject!

We really appreciate the commitment shown by the team mentors to their students, giving them the opportunity to show what they can do (= a lot!), as well as adding value to their university education and future career prospect. We want to especially thank the tireless efforts of those who continue to field new student teams year after year. We hope that even more university teachers will volunteer as team mentors and encourage their students to join!

This year's topic is "Antenna for Body Area Network (BAN)". The goal is to design and build an antenna that is optimized for on-body placement in a BAN application. The antenna should be used to transfer data to an Android smartphone via a low-power Bluetooth link. In such a BAN scenario, the ability of the antenna to properly interact with the on-body propagation environment is critical for the link performance.

From the 27 preliminary design proposals, six semifinalist teams were chosen in mid-November last year. The proposals were evaluated according to the criteria of creativity, likelihood of achieving the design goal and specifications and quality of written materials. Each semifinalist had just over four months to build their proposed antenna systems with a budget of US$1500, as well as to write a detailed technical paper and make a youtube video demonstration.

The semifinalists (in random order) are:

The submitted reports and youtube videos were evaluated based on the criteria of creativity, justification of achieved link performance, completeness of the description in the report, functionality of the system as determined by the video, and quality of written materials. A decision was then made on the three finalist teams, and they were: Aalto 2015 (Finland), Gerhards Grabbar (Sweden) and OU-BAN (USA).

Each finalist team received stipends of US$2500 for team members to attend this year's Symposium and demonstrate their working designs. Based on the on-site link measurement/demo and the semi-finalist evaluation results, the first-, second-, and third-prize winners were selected to receive cash prizes of US$1500, $750 and $250, respectively. The first-, second- and third-prize winners were Gerhards Grabbar, OU-BAN and Aalto 2015, respectively. The winners were announced at the Symposium’s Awards’ Banquet. In addition, all three finalist teams may revise their final reports for possible publication in the IEEE Antennas and Propagation Magazine, under the Education Column.

Coordinator: Buon Kiong Lau
Lund University, Sweden
This email address is being protected from spambots. You need JavaScript enabled to view it.
27 July 2015