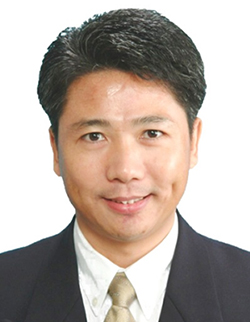 Prof. Joshua Le-wei Li passed away on 22nd of May 2015 at age 54, after a short and valiant fight with suddenly-discovered cancer. He was a National Chair Professor at the University of Electronic Science & Technology of China, where he was appointed as the Founding Director of the Institute of Electromagnetics, the Director of the Centre for Space Polar Energy Microwave Power Transmission, and the Vice Chair of the University Academic Committee. He was also a Professor of Electrical and Computer Systems Engineering at Monash University (Malaysia campus).

Le-Wei (Joshua) was born in Nanjing, Jiangsu, China, on the 26th of July, 1961. He received his B.Sc. degree in Physics from Xuzhou Normal College (XNC, known later as Xuzhou Normal University, and now as Jiangsu Normal University), Xuzhou, China, in 1984; the M.Eng.Sc. degree in Electrical Engineering from the China Research Institute of Radiowave Propagation (CRIRP), Xinxiang, China, in 1987; and the Ph.D. degree in Electrical Engineering from Monash University, Melbourne, Australia, in 1992, respectively. From November 1992 to January 2011, he was with the Department of Electrical and Computer Engineering, the National University of Singapore (NUS), where he was a Professor and the Director of the NUS Centre for Microwave and Radio Frequency. From 1999 to 2004, he was appointed to the High Performance Computations on Engineered Systems (HPCES) Program of the Singapore-MIT Alliance (SMA) as a Faculty Fellow. Since 2009, he has been a National Chair Professor with the University of Electronic Science and Technology of China.

Le-wei (Joshua) has been teaching and researching in the areas of electromagnetic theory, computational electromagnetics, radio-wave propagation and scattering in complex media, microwave propagation and scattering in tropical environments, and analysis and design of antennas. He was passionate for his work and has been a prolific researcher. He has authored and co-authored 4 books and 48 book chapters, over 370 international refereed journal papers, 49 regional refereed journal papers, and over 400 international conference papers. In particular, he made significant contributions to the theory of Green's functions and developed analytical dyadic Green's functions for different electromagnetic structures and media; he was informally known by many of us as "the man of Green's functions". He was the Editor and Associate Editor of Radio Science, an Associate Editor of the journal Radio Science, and Associate Editor of the International Journal of Numerical Modelling: Electronic Networks, Devices and Fields, and an Associate Editor of the International Journal of Antennas and Propagation.

Le-wei (Joshua) was elevated to the Fellow grade of the IEEE in 2005 and the Fellow grade of The Electromagnetics Academy in 2007. He received two best paper awards from the Chinese Institute of Communications and the Chinese Institute of Electronics, the 1996 National Award of Science and Technology of China, the 2003 IEEE AP-S Best Chapter Award (when he served as the IEEE Singapore MTT/AP Joint Chapter Chair), the 2004 University Excellent Teacher Award of the National University of Singapore, the 2013 Golden Crown Award from the Sichuan provincial government, the 2014 Multidisciplinary Platform Award for Excellence from Monash University at Sunway, and the 2014 National Friendship Award from the State Administration of Foreign Experts Affairs of China.

Le-wei (Joshua) was a very valuable member of the IEEE community, and he was extremely active in both the Antennas and Propagation (AP) and Microwave Theory and Techniques (MTT) Societies. He served as a Distinguished Lecturer for the IEEE AP Society from 2011-2013. He was also a member of the MTT Technical Committee 15 on Microwave Field Theory.

Lei-wei (Joshua) now has departed on his final voyage and we have lost a good friend and prolific colleague. He leaves behind his loved ones, friends, students, research associates and colleagues to remember his legacy.

For condolences to his family and for further information, you may send email to This email address is being protected from spambots. You need JavaScript enabled to view it..