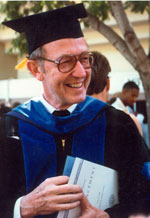 His experience included periods at the Applied Physics Laboratory of John Hopkins and at the Hughes Research Laboratories, where he headed the antenna research activities. He was a founder of Rantec Corporation, serving as its first Vice President and Technical Director. He was also on the faculty of the University of Illinois.

He joined UCLA in 1954 as a lecturer, working his way up to associate professor in 1957, then full professor in 1959. He was very popular with undergraduate and graduate students, having received several teaching awards over the years. In 1968, when the school was partially departmentalized, Bob became the first chair of the Electrical Engineering Department and was instrumental in its rise to national prominence. He was the first person to hold the Hughes Distinguished Chair in Electromagnetics at UCLA. Bob was also the author of two seminal textbooks, Antenna Theory and Design and Electromagnetics, both published by the IEEE Press.

Bob received many honors for his research and teaching. He was named twice “Distinguished Lecturer” by the IEEE. He became IEEE Fellow in 1961. He was the recipient of two Best Paper awards by the IEEE Antennas and Propagation Society. The first one was an application paper entitled, “The Design of Microstrip Dipole Array Including Mutual Coupling; Part 1: Theory; Part 2: Experiment,” IEEE AP Transactions, vol. 29, no. 5, pp. 757-765, Sep. 1981. The second one, “An Improved Design Procedure for Small Array of Shunt Slots,” was published in the AP Transactions, vol. 31, no. 1, pp. 48-53, Jan. 1983. In addition he was the coauthor with S. Hashemi-Yeganeh in the RWP King Award for the paper, “Analysis of Untilted Edge Slots Excited by Tilted Wires,” AP Transactions, vol. 38, no. 11, pp. 1737-1745, Nov. 1990. He was a member of Sigma Xi, Tau Beta Pi, and the New York Academy of Sciences. He was Chairman of the Coordinating Committee for the 1981 IEEE Antennas and Propagation Symposium, held in Los Angeles, CA. Bob Elliott served as the Chair of the USNC-URSI Commission B during the triennium 1988-90. He was elected to the National Academy of Engineering in 1988 for “basic contributions to the electromagnetic theory and design of array antennas, and for outstanding leadership in engineering education.” In 1988, he received Distinguished Achievement Award of IEEE Antenna and Propagation Society. In 2000, he was a recipient of an IEEE Third Millennium Medal.

Bob retired from UCLA in 1991. He leaves his colleagues with two legacies: a very large body of creative work, and a huge number of former students, colleagues, and acquaintances, all of whom will miss Bob as a friend. Private services were already held.