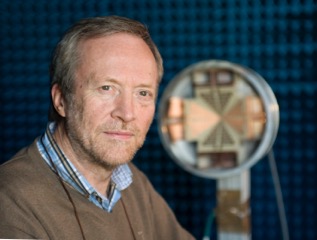 Prof. Per-Simon Kildal was an outstanding antenna specialist and the author or coauthor of over 700 papers in journals and conferences, concerning antenna theory, analysis, design, application and measurement techniques. He was one of the most productive authors at Chalmers and has been cited almost 9000 times. His most cited paper entitled “Artificially soft and hard surfaces in electromagnetics” was published in IEEE Transactions on Antennas and Propagation in 1990 and has been cited more than 400 times. Prof. Kildal holds many granted patents for reverberation chambers, reflector antennas, dipole antennas, meta material applications and most recently GAP™ waveguide technologies.

Prof. Kildal had an extremely high international reputation in electromagnetics, antenna theory, and wave propagation. The quality and quantity of his research place him in the top 1% researchers in these areas worldwide. His work has had a major impact in the field of applied electromagnetics for antennas and propagation research, development and production. Prof. Kildal had an uncanny ability to grasp new concepts, “to see the big picture and hear the grass growing” while managing comfortably with the mathematical details. It is very rare to encounter a scientist, who is equally versatile and highly successful in theory, hardware and application. It was this versatility, coupled with hard work and a fertile imagination that contributed to Prof. Kildal’s successes and international reputation.

Prof. Kildal was awarded with several prestigious international prizes, most notably the “Distinguished Achievement Award” of the IEEE Antennas and Propagation Society. Kildal was invited to give keynote talks at conferences all around the world at numerous occasions and was appointed IEEE Distinguished Lecturer for two periods. Prof. Kildal was the recipient of a prestigious individual European Research Council Advanced Grant in 2013.

Per-Simon made important contributions to radio astronomy instrumentation, in particular via his work in helping design the Gregorian secondary optics installed on the Ø305m radio telescope in Arecibo, as part of its major upgrade in1997. His work significantly improved the performance of the Arecibo dish, which is to date the largest and most sensitive radio telescope in the world. Additionally, the Eleven-antenna ultra-wide band feed, a patented invention of Prof Kildal, is under consideration for use on the Square Kilometre Array (SKA), which is the next huge step in centimetre and metre wave radio astronomy. The Eleven-feed is also being used in geodetic Very Long Baseline Interferometry in order to realize the new specifications of broadband observing which will allow submillimetre accuracy position determination over global baselines.

Kildal was the founder of Bluetest AB and Gapwaves AB. Bluetest AB provides new Over The Air (OTA) measurement technology for wireless devices with Multiple Input Multiple Output (MIMO) antenna systems. Their well proven reverberation chamber test systems are a result of Per-Simon’s research at Chalmers and they are now used by many companies and operators all around the world. The innovative measurement technology of Bluetest is now adopted in international standards. Gapwaves AB aims at commercializing the GAP™ waveguide technology as the leading technology platform for millimeter wave and terahertz applications and the focus is on developing a mass production method for manufacturing of GAP™ waveguide based antennas. The GAP™ technology is a result and further development of Kildal’s pioneer work on soft and hard surfaces.

Per-Simon taught Antenna Engineering based on his antenna textbook, which recently came out in a new release, and he has supervised and led 24 students to a PhD degree and 9 to a Licentiate degree. He has been very active in the antenna systems community such as COST (the European Cooperation in Science and Technology) actions, EuCAP (European Conference on Antennas and Propagation), EurAAP (the European Association on Antennas and Propagation), IEEE (Institute of Electrical and Electronics Engineers), to mention the most important ones. He was conference chair of EuCAP 2013 which was organised in Gothenburg and was a great success. He was also a popular and appreciated lecturer at antenna courses organised by ESoA (European School of Antennas) and others.

Per-Simon had great success with his research and was a very active researcher until he passed away. He initiated and was the main driver of the application for the Chalmers Antenna Systems Excellence Center (Chase) which started in 2007 with funding from Vinnova, participating companies and Chalmers. Chase has been a very big success with excellent evaluations by international experts and has contributed to the success of the participating companies. During the last few years, Per-Simon was more active than ever and has been the main writer of three proposals for large research initiatives on OTA and GAP™ technologies. He was also in the process of writing a fourth proposal for an Industrial Research Center (IRC) during his last months before his tragic death. This proposal will be continued by his colleagues in the division of antenna systems and they will continue in Per-Simons footsteps.

Per-Simon was able to do what he loved to do until the very end. He participated in the EuCAP 2016 conference in Davos when he got a rupture on the aorta and came to hospital where he had two surgeries. Unfortunately, he did not survive the surgeries. He was in coma for one week after the surgeries and then passed away on April 21, 2016. The day before the conference, he was skiing in the Alps with one of his daughters and a few more friends. Skiing was among his favorite interests outside of work. He spent the Easter break with his family and friends in the Norwegian mountains almost every year. During the last few years he has taken his research group for a much appreciated long skiing weekend also to the Norwegian mountains. He was always joking about that participation in the skiing weekend was a requirement to get a PhD degree in the antenna group.

The death of Per-Simon is a very tragic loss for his family, the scientific community, Chalmers, and the colleagues at the Department of Signals and Systems. Per-Simon is survived by his wife, two daughters and a brother. We will all miss him very much.